We’re just days away from the launch of Xbox One X, and games are already being updated with support and enhancements for Microsoft’s powerhouse console. The latest to get the One X treatment is Forza Motorsport 7, which has added the necessary assets and other bits it needs to power its high-fidelity, high-framerate gameplay on the console.

Forza Motorsport 7 is one of Microsoft’s flagship titles for showing off what Xbox One X can do. In terms of performance, the game will run in 4K at 60 frames per second (FPS) on the console, but it’s also getting some visual enhancements as well, with improvements to lighting, shadows, and more. 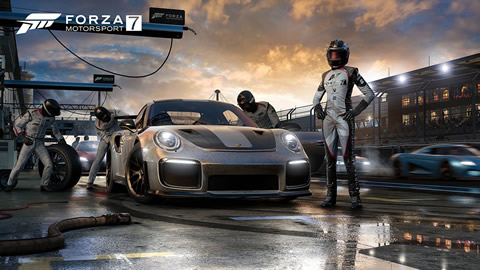 For Xbox One X players, today’s update contains the Xbox One X version of Forza 7, including all the beautiful enhancements that will allow players to enjoy the biggest racing game of the year in stunning native 4K, including high-resolution assets. With brand new graphical improvements like improved lighting and shadows resolution, this update lets Forza Motorsport 7 unleash the power of Xbox One X.

While the Xbox One X enhancements are the highlight of this patch, it also includes some new features and a massive list of fixes and improvements for all versions of the game. The update marks the return of the Auction House, where players can exchange cars for credits with other players. Online multiplayer is also adding gameplay modes like Drag, Tag, Virus, Keep the It and Pass the I. The Samsung QLED Car Pack is also now available as part of the Forza 7 Car Pass.