Digital revenues have skyrocketed in recent years for publisher Electronic Arts due in large part to the Ultimate Team modes in console sports games and free-to-play model utilized for their mobile sports games.

While the NBA Live series has struggled on consoles, with the brand possibly damaged beyond repair, what would happen if the game had no entry cost and could reach the hands of more people?

To an extent that can now be assessed with the first-ever mobile edition of NBA Live, which is out on Canadian stores and will be expanding to the U.S. and other regions in the near future. The game is free-to-play but of course supported by the purchase of in-game currency. This is the route that has proven so successful on mobile for the company with their Madden and FIFA flagships. 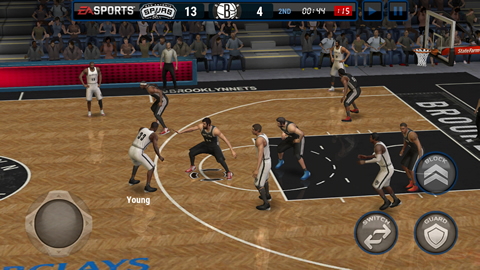 Surprisingly, not only is NBA Live Mobile a fun game with a compelling concept behind it, but there are even some elements executed better with it than the series does on consoles. The simplification that comes with the Ultimate Team model, generally effective controls, and a free-flowing gameplay design, makes it one of the best team-based sports games to be found on mobile devices.

NBA Live Mobile is all about building up your personal team’s roster. There’s no playing with “real” NBA team rosters. Instead, the user starts with a base roster of low-rated players, and then through the purchase of card packs, acquisitions from the Auction House, and items received through rewards and completing collections, build the team into a powerhouse.

The game starts out with a tutorial that goes over the basics of playing fairly effectively. The controls include an on-screen virtual stick for movement and three “buttons” that have different functions when on offense and defense. There are no optional control schemes. The only thing that can be changed is reversing which side has the stick and which the buttons.

NBA Live Mobile features three primary modes of play. The first is a “Season” which consists of 14 games against A.I.-controlled teams. Win enough of them and make the three-game “Playoffs” and getting through those leads to the one-game Finals. Taking home the championship will bring lots of rewards with it, and then the season starts over against marginally better competition.

There are also Live Events. These are more along the lines of mini-games or brief stretches of gameplay that have an objective to achieve. The completion of them earns more coins and/or rewards in the form of cards, trophies, and collectibles. New Live Events are added daily.

Then there are Head-to-Head games. These are turn-based, with the user that initiates the game playing the first and third quarters against the other team’s AI controlled players, and the other playing the second and fourth quarters. There are “fans” earned through the games which contribute to leaderboard progression, and advancement on the leaderboards is rewarded with special item packs.

The method of playing “head-to-head” makes some sense but in practice really doesn’t work out. I’ve yet to have a single game go beyond my playing of the first quarter. Either the opponents I’ve challenged simply have no interest in playing the games or they are seeing a score that I’ve built up from the first quarter and deciding against continuing.